Just in case you have an extra $5000 in your pocket, you can now spend it on the cheesecake at the Rafele Ristorante in Greenwich Village. Chef Raffaele Ronca offers this crazy expensive cheesecake and Robert Frank from CNBC recently got to enjoy one.

So what’s in this cheesecake? The cheesecake starts with fresh formaggio from water buffalo in southern Italy which is flown in the day before it is to be used. Next, he includes 200-year old cognac that costs $2500 a bottle. He adds in vanilla beans from Madagascar and then white truffles from Alba in Italy.

Next, the cheesecake includes some more flavors and a sprinkling of gold flakes. And he tops it with other goodies that you can read about. The cake is actually in the Guinness Book of World Records as the most expensive cheesecake ever made. It takes five days to prepare.

Of course, if you want to indulge in something delicious that it priced at a regular price, you can enjoy their regular cheesecake for $9 per slice.

On March 8, International Women’s Day, organizers of the Women’s March on Washington called for “A Day Without Women.” The march on Washington drew about 470,000 participants in DC and more than 4 million people globally. This month’s agenda calls for women to not work, either at home or at their paid jobs, to not shop, unless it is at stores owned by minorities or by women, or small shops, and to wear red. There was also a rally held at Washington Square Park in Greenwich Village.

The “Day Without Women” modeled itself after February’s “Day Without Immigrants,” in which immigrant workers tried to stay home from work and find other ways to demonstrate the importance of immigrants to the overall economy.

The following local eateries joined in the day of remembering the crucial role women play in our economy in particular and society in general.

Experimental pizza joint Williamsburg Pizza has added a fourth store to its growing empire, at 310 Bowery Blvd. The owner and chef is Nino Coniglio, the winner of 2016’s Pizza Maker of the Year Champion award.

The pizzeria’s other locations in Williamsburg, the Lower East Side, and at the Barclay’s Center have become synonymous with a broad menu offering a huge selection of wild and crazy toppings. Some possibilities are apple, bacon, and wild mushrooms, but at the new location on the Bowery the menu, at least for now, will be limited to just one kind of pie.

On offer on the Bowery will be either a large or small version of “grandma pie” which comes with aged parmesan cheese and black lava salt. Ashwin Deshmukh, Coniglio’s partner, says that, at least for now, “We want to do one product, and do it really well.”

Folks on the Bowery will most likely not have to wait too long for the menu to grow. Coniglio has already brought out a few new experimental pies since opening: such as “Not Detroit Style” pizza pie which has collapsing dough. Since the new location will not be dealing with wholesale selling customers can expect to see lots more secret menu offerings when the feeling strikes Coniglio.

The new branch is open for lunch and dinner, with delivery to be added at some future date.

New Yorkers just can’t help themselves: news of a new eatery on its way simply sets the saliva flowing and the anxiety level growing. The latest longing is directed towards a Philadelphia-based eatery that made the decision to enter the New York market last February, but did not announce a location until this past summer: 334 Bowery. Back then, in the month of June, the loose timetable for opening day predicted an “early October” opening day, but it seems a little more time is needed.

In the meantime the more curious among us can sneak a peek into the new branch of PYT and anticipate their visit. The windows are up and un-blocked so it is possible to see that there is a bar and counter-top near the doorway, supplied with bar-stools. In the back is an arcade cabinet with the PYT brand emblazoned on it.

As for the food, we were told back in July by the PYT master Tommy Up that we can expect some of their favorite fun food fare:

In addition there will be something called a D’oh Nut Cheesteak Burger making its debut in NYC.

We are hoping this restaurant will have better luck than the many previous establishments which opened with high hopes, but did not succeed in the end. 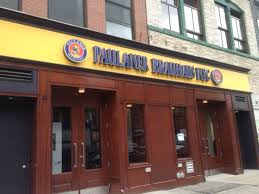 Paulaner Re-Opened on May 30

As of May 30 the Paulaner Brauhaus NYC re-opened with a new, fabulous look. The restaurant/brewery now has a shorter name and a new chef to match their completely re-done menu.

Located on the Bowery, the 4,000 square-foot microbrewery shortened its handle to just Paulaner. The establishment was first opened in November, 2013, but it never really established itself as quite hip enough for the up and coming neighborhood. Wolfgang Ban, co-owner of an upscale Austrian restaurant in midtown and also Edi & the Wolf on the Lower East Side, was called in to consult on Paulaner’s new look.

“It’s always difficult to talk about a situation when you come in wanting to change it,” said Mr. Ban. “I think one of the bigger disconnects I saw was the chef who is American. I don’t think he understood the German flavor profile.”

In addition to re-tooling the menu, a 16-foot long, rustic communal table and booths was added. New lighting and interior design was created also to create a whole new look and feel.

At first we thought the pizza restaurant at 71 Clinton Street (Rivington) was just temporarily closed until their burst water pipe was repaired. Then the closure was prolonged for weeks, and now we have discovered that San Marzano is closed for good. There was a bulletin from Michael Amodeo, auctioneer, that an auction was taking place.

The restaurant was opened by David Malekan in 2008 and just renewed its liquor license last year. Clinton Street is a rough place for eateries. The old Falai bakery, across the street from San Marzano, just reopened after a long remodeling hiatus. Another restaurant, Alias, was replaced by the Black Crescent on the opposite corner, last year.

One of Germany’s most popular beers (and that is saying a lot), Paulaner, opened a haven for beer lovers on The Bowery just south of Houston Street. With room for 200, the space was once the home of the iconic saloon Sammy’s Follies, and was a restaurant supply store in its most recent incarnation.

The Paulaner Brauhaus Microbrewery is quite serious about its name. Upon entering the restaurant it is overwhelmingly apparent that you have come into a brewery, as the décor includes giant brew kettles and mash tuns. There are four beers served which are brewed on the premises, and on tap. If you wonder how the equipment got into the building as its all way too big for the doors or windows, the answer is through a hole cut in the roof.

The Brauhaus consists of two rooms; a large bar area and a dining room. Both rooms can hold about 120 beer drinkers (and diners) comfortably. There is an additional space downstairs for private parties with an attached outdoor area that the restaurant does not yet have permission to use. (The restaurant is required to adhere to strict noise level limitations from the community board which also forbade the Brauhaus from installing more than one television to watch German soccer games.)

The menu offers German standards like sausages and wiener-schnitzel, hamburgers and the famous Berliner- jelly donut, for dessert. And don’t forget the real reason you are there- for the beer!

Gemma Restaurant Back Up and Running

After forcing an evacuation of the restaurant last Tuesday due to a small kitchen fire the Gemma restaurant at the Bowery Hotel has reopened for business.

The fire broke out at about 11am on Tuesday in the restaurant’s kitchen, forcing patrons out of the restaurant. Luckily the fire was not out of control and the rest of the building did not need to be evacuated.

“We evacuated some of the building. It was just contained to that duct work in the kitchen that extended up to the upper floors, but we didn’t evacuate the whole building.”

Thankfully no one was hurt in the fire.

On November 12, 2012 The Bowery Hotel will host a competition to choose among the best chefs, restaurants and food industry talent in the country. Organizing the third annual “Eater Awards” is Eater, which will showcase a list of 10 of the best chefs from the most exclusive restaurants all over the nation. Among the chefs will be Justin Yu, owner and chef of Oxheart in Houston, Texas.

The public is invited to come and taste of the finest delicacies these top-notch chefs can prepare, some for the very first time in New York City, at Eater Eve, which will take place on Sunday night, November 11th, at 6 to 9pm. In addition to the fabulous specialties concocted by these world class chefs will be an open bar and a great, unforgettable evening of gastronomic fun.

The cost per person is $95. Among the ten chefs will be Stuart Brioza and Nicole Krasinski of Statebird Provisions in San Francisco; Tim Cushman of O Ya in Boston; and Mike Doyle, Maurepas Foods in New Orleans.

At number 10 Delancey Street on the Lower East Side a new watering hole whose heart is in the past has opened. The canteen is named “One Mile House,” after a famed 19th century bar located exactly one mile from City Hall; perfectly positioned so that city politicos who needed a little brewsky while on the job could walk on over and whet their whistles while still running the city.

Today’s “One Mile House” is a comfortable meeting place with a generously sized lounge and large, airy windows letting in just the right amount of light during the day, while at night the stop is lit with rounded orbs creating an intimate and warm atmosphere.

The décor does not quite reach back to the 1800s, but does give a nod and wink to the heyday of New York during the ‘roaring twenties’ and “depression thirties,” with antique subway tiles, tin ceilings and newspaper clippings from that era decorating the restrooms.

Along with an always changing beer list which will make the most avid beer aficionado smile is a menu serving classic pub-style food such as burgers, Hot Legs, (a version of buffalo wings), and some twists on pizza. Especially fun is the once-a-month event when breweries come into “One Mile House” and do a “Tap Takeover,” offering samples of their own special concoctions.