Whatever worry Aby Rosen of RFR Reality had about obtaining permission for the renovation of his landmark structure has not vanished like, or perhaps not like yesterday’s graffiti. 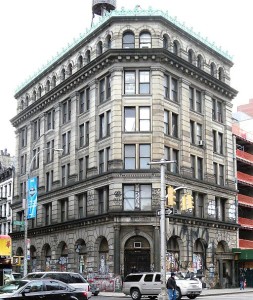 to bring back 190 Bowery as a modern locale for office space, agreeing to keep the years of accumulated graffiti in its much beloved place on the street level walls.

Completed in 1899, the landmarked structure, located at the corner of Spring Street on Bowery, originally served as the office of Germania Bank. One year ago Rosen purchased the building for $55 million. He would like to turn it into offices with a retail space on the ground floor.

Rosen plans on restoring the windows, stained glass and metal gates, but will not be washing away the many years of street painting exhibited on the street level façade. Apparently the Landmarks Preservation Committee is pleased with that plan, and Rosen won the committee’s approval to begin the renovations.
Michael Goldblum, commissioner of the committee, stated that the restoration is “a real testament to the layering that preservationists seek.”